I created a retro-clone comparison chart, since I was curious and it seems to be a common question. Please comment on this post if you have any corrections or suggestions. 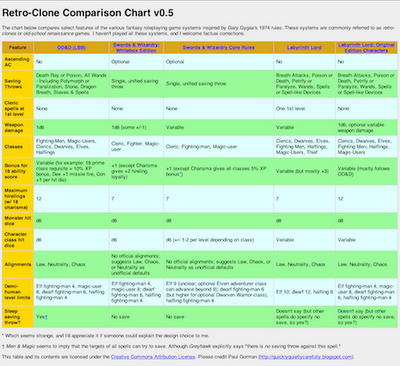 Justin Alexander recently made several posts about the dungeon design methods seen in Paul Jaquays' adventures. Those articles are worth a read in themselves, and they use an interesting analytical technique which visualizes a dungeon as logical flowchart rather than a floorplan. I'm going to start making such flowcharts as a quality control measure after the first rough draft of my dungeons. (This reminds me of Stefanie Posavec's sentence drawings, which are worth a look if you're a fan if visualizations.)
Posted by paulg at 3:39 PM No comments:

I can't believe I missed out on the Secret Arneson Gift Exchange. Oh, well. Next year.
Posted by paulg at 9:11 PM No comments:

Dungeons are are often damp places. It's common for pools of water to collect in low-lying areas of dungeon levels. Rarely, pools have unusual magical characteristics. The following table is adapted from the first issue of The Strategic Review:
Posted by paulg at 11:52 AM No comments:

I've been thinking about alignment as a thematic dichotomy. Each campaign could have its own thematic alignment scheme. OD&D is Lawful/Chaotic. Other possibilities might be Civilized/Barbarous (Conan), Mundane/Fey (Strange & Norrell), or New Religion/Old Religion (Arthur). Carcosa is interesting in that it repurposes OD&D's general Lawful/Chaotic alignment scheme by making it a specific, thematic element of the game: lawful characters oppose releasing Lovecraftian Old Ones from imprisonment, while chaotic characters seek to aid and serve the Great Old Ones.
Posted by paulg at 2:46 PM No comments:

Monster INT is a helpful stat

Working with OD&D sources, one of the things I miss is an intelligence stat for monsters. It's one of the few things which causes me to reach for my 1e Monster Manual or OSRIC. As a DM, I've always found those intelligence scores to be important when controlling monsters. Maybe this is one of those things a 0e DM has to decide for himself—my stirges are cunningly intelligent, or the traumatic death of wights have destroyed their higher faculties in my game. That's flavor, I suppose, and it messes with player expectations (which could be good or bad).
Posted by paulg at 10:17 AM No comments:

I just discovered Otherworld Miniatures. I've been meaning to find some classic pig-faced orcs, and their bugbears are pretty great too:

I came across this Angry Villager Rule in The Underword & Wilderness Adventures:

Whenever the referee finds that some player has committed an unforgivable outrage this rule can be invoked to harass the offender into line. Within the realm of angry villagers are thieves from the 'thieves' quarter'..."

What a great urbane adventure module could be made from the material in Fritz Lang's M! (Don't read the last two paragraphs of that linked essay if you haven't seen M yet. And you should see it.)
Posted by paulg at 2:42 PM No comments:

Do you employ hirelings?

When I first started reading about old-school gaming, what struck me was how little my adolescent Basic and 1e games resembled the Old-School Style. Much of the difference, I'm starting to suspect, was that we ignored rules that sounded "boring" without trying them. We didn't use encumbrance, for example, or keep track of light sources. In retrospection, resource management was a huge element of the game—an element we ignored perhaps to our detriment. So, I've been picking through my memory and reading old rulebooks, making a list of mechanics I've never actually played. One of those is the use of hirelings. In Men & Magic, it says:

"Charisma is a combination of appearance, personality, and so forth. Its primary function is to determine how many hirelings of unusual nature a character can attract. This is not to say that he cannot hire men-at-arms and employ mercenaries, but the charisma function will affect loyalty of even these men. Players will, in all probability, seek to hire Fighting-Men, Magic-Users, and/or Clerics in order to strengthen their roles in the campaign. A player-character can employ only as many as indicated by his charisma score"

If the primary function of charisma is to determine the number and loyalty of hirelings, and charisma itself was important enough to make it one of the six attributes, then hirelings must be an important part of the game, right? On the other hand, M&M later speaks of That makes me question whether hirelings were in fact a vestigial hold-over from Chainmail, and little-used in actual D&D play. I'd love to hear anecdotal evidence one way or the other. Did you use hirelings in your games back in the day? Do you use them now?
Posted by paulg at 6:03 PM 1 comment:

Part 1: The Malevolent Mystery of Marshburg

On Sunday afternoon I ran my first 4e game—part of an adventure I call The Malevolent Mystery of Marshburg. The session went pretty well, particularly in light of how long it's been since I've written an adventure or DM'd, and that none of us have played 4e. My players even asked if we could continue the adventure tomorrow after work, which was a nice complement.


In five hours we gathered rumors in town, found the dungeon site, explored a half dozen rooms, and completed two major encounters. Kobolds were defeated. A trap was disarmed. One PC was reduced to zero hit points, but recovered. All but one of the Goblins were killed, and that one managed to escape by spiking a door shut between him and the PC's. (If the players can do, why not the monsters?)


I tried to run certain aspects of the game in "classic mode". The trap was disarmed through dialogue between me and the players rather than a simple role, for example.


4e feels more like a tactical miniatures game than any previous edition, but that's all I'm prepared to say until we give the game a fair run-through in a number of sessions. I've been playing with Scupley.
Posted by paulg at 3:48 PM No comments:

The exchange of sealed envelopes

From The Strategic Review (Spring 1975):

Although it has been possible for enthusiasts to play solo games of DUNGEONS & DRAGONS by means of “Wilderness Adventures”, there has been no uniform method of dungeon exploring, for the campaign referee has heretofor been required to design dungeon levels. Through the following series of tables (and considerable dice rolling) it is now possible to adventure alone through endless series of dungeon mazes! After a time I am certain that there will be some sameness to this however, and for this reason a system of exchange of sealed envelopes for special rooms and tricks/traps is urged. These envelopes can come from any other player and contain monsters and treasure, a whole complex of rooms (unfolded a bit at a time), ancient artifacts, and so forth. All the envelope should say is for what level the contents are for and for what location, i.e. a chamber, room, 20’' wide corridor, etc. Now break out your copy of D & D, your dice, and plenty of graph paper and have fun!

The idea of exchanging envelopes amuses and inspires me. Did players actually do that?
Posted by paulg at 8:40 AM 1 comment:

Would not a turn by any other name be 10 minutes?

Before 4e, if I recall correctly, a round represented 10 minutes of game time, and turn represented 1 minute of game time. AD&D (or was it one of the OD&D supplements?) introduced the 6 second segment. So, 1 round = 10 turns = 60 segments = 10 minutes.
Fourth edition (PHB page 266) defines a turn as the 6 seconds during which you, the player, take your actions. A round is the same 6 seconds, during which everyone takes their turn. So, 1 round = 1 turn = 6 seconds.
As far as I can tell, 4e is silent on the issues of non-combat time, movement, and encumbrance. The closest related rule I found was the table about duration of light sources (PHB page 262), which specified that a candles and torches last 1 hour, and a lantern burns for 8 hours per pint of oil.
Posted by paulg at 11:05 AM No comments:

I just (mostly) finished preparing my first fourth edition D&D adventure. I had planned on doing a quick conversion of U1 The Sinister Secret of Saltmarsh, but was frustrated. I ran into enough things which were omitted or entirely changed in 4e (no more Charm Person spells? No more Illusionists?) that I eventually decided to create an entirely new adventure vaguely inspired by Saltmarsh. I'm running my Malevolent Mystery of Marshburg tomorrow, and will report on how it goes. If my players remember Saltmarsh, they'll be in for a surprise.
Anyone thinking of doing a quick conversion of an old module for 4e should be wary.
Posted by paulg at 10:13 AM No comments:

Where's that box of my old D&D stuff?

I started playing D&D with the Holmes Basic set in the early 80's, and eventually got involved with AD&D, Call of Cthulhu, and bunch of other games. I fell out of the hobby about ten years ago, but recently my friends talked me into starting a 4e game.
In the process of reading about 4e, I stumbled across the old-school Renaissance and retro-clone stuff. After reading Matthew Finch's A Quick Primer for Old School Gaming, I find myself far more excited about the idea of running 0e than a 4e game.
Unfortunately, most of my Basic and 1e games, back in the day, tended more to hack-n-slash, overdone pseudo-epics rather than the kind of play Matthew Finch describes. As I read the old-school play descriptions, I think—damn!—I never played that game. But I want to.
Consequently, I'm starting this blog to record my exploration of an original D&D I never knew. Also, there will probably be some analysis of 4e as I decide whether it's worth trying to convince my group to switch to something like Swords & Wizardry or Labyrinth Lord.
Posted by paulg at 10:11 PM 1 comment: