I really like the simplicity and efficiency of Delta's target 20 combat algorithm, but using character level as one of the variables doesn't match the progression shown in the 0e attack matrices. So, I made the table below. I think it works, but let me know if I've missed anything. For example, a level 8 fighter would have an attack bonus of +6. If he attacked a monster with an AC 2, he would have to roll a 12 or higher to hit (attacker bonus 6 + target AC 2 + d20 >= 20).
Posted by paulg at 9:04 AM 3 comments:

Looking at the attack matrix for men on page 19 of Men & Magic, I'm wondering what happens at high levels. The column header "16 & +" seems to indicate that fighting-men never get better than that (e.g.—hitting AC 2 on a roll of 5 or better). Given that fighting men progress in attack ability every three levels and top-out at level 16, what about the other classes? Clerics advance in attack ability every four levels, and magic-users every five levels. Will a magic-user eventually (at level 26) be able to hit AC 2 with a roll of 5 (i.e.—catching-up with the combat abilities of fighting-men, but ten levels later)? Or, does improvement of their combat ability end at level 16, hitting AC 2 with a roll of 10? It looks to me like combat ability for all classes stops improving at level 16; to hit AC 2 fighting men top-out at a roll of 5, while both clerics and magic-users top-out at a roll of 10 to hit AC 2. Do you agree? Or could Men & Magic mean that magic users and clerics are eventually able to hit AC 2 with a roll of 5? EDIT: I initially missed the bit that says So... it seems that attacks will continue to get better beyond level 16, yes?
Posted by paulg at 10:46 AM 4 comments:

As linked by Scott at Huge Ruined Pile, these hand drawn dungeon geomorphs by dysonlogos are inspiring. Dysonlogos says:

[...] my challenge to myself for the next three months is to draw up a 100′ x 100′ dungeon geomorph every day, six per week, and then compile that week’s geomorphs into a single page PDF release every Friday as my Friday Map.

I may have to try my hand at making some geomorphs.
Posted by paulg at 12:22 PM No comments: James at Grognardia posted today about wanting a clone that is closer to the original game. Here's the comment I made to his post, which I figured I might as well repost here by way of an announcement:

I think it's a useful exercise (one that I'm currently about 50% done with myself) for anyone trying to come to grips with OD&D to write their own clone of the three LBB's. Organize it in a way that makes sense to you and your players, but hew as closely as possible to the originals. I've learned a lot by doing this. One of the main problems/decisions is what to do about the ambiguities and omissions in the originals. You must decide whether to preserve those ambiguities or to clarify them. I've settled on mostly preserving the ambiguities, and providing filler for the omissions in an appendix. If my lawyer gives it the thumbs-up, I'll release my clone as a free PDF (along with the LaTeX source files). I encourage everybody interested in this kind of thing to give clone writing a try for themselves. Don't worry about having too many clones around; filtering for the best content is one of the things the internet does well.

This is a couple of years old, but Matt Finch's comments in a Grognardia thread about old school art impressed me enough that I want to mention it here for my own future reference. This is not portraiture; you don't see heroes posing for the camera. The art of David Trampier, such as the original 1978 cover of the first edition Players Handbook, exemplifies these criteria. Afternoon doodle on the back of a business card: 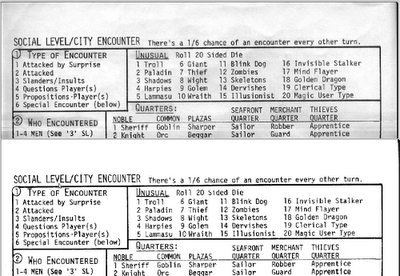 This is mainly for my own reference, but some of you might also find it useful. The RPGnow PDF's of original Judges Guild products—like the Ready Ref Sheets—were made from low-contrast grayscale scans. They read OK on screen, but don't print cleanly. If you have a Linux box (or any OS with a recent ImageMagick version) this command will produce a cleaner printing PDF:

That grinds my machine to a halt for several minutes, so you might want to lower the priority level of the process with nice. If you have an older version of ImageMagick, you may be able to achieve similar results using the -contrast-stretch option instead of -brightness-contrast. If you have a better way to achieve similar results, I'd like to know. Thanks.
Posted by paulg at 5:49 PM 2 comments:

I've been looking for an initiative system for my nascent OD&D game, and came across the weapon priority charts on page 17 of the Judges Guild Ready Ref Sheets. I'm not positive that those charts were originally intended as an initiative system per se, but they could do the job. This violates my general principle that any house rule should be expressible as a simple sentence, but something about it appeals to me—perhaps that it solves the initiative problem while giving players significant tactical options with low rules overhead. The original charts assign a weapon priority based on the type of attack, the armor class or monster speed, and the dexterity of each combatant. Three variable is a little too crunchy for my tastes. I don't think much would be lost by dropping the armor/speed and dexterity variables, and assuming that all actions of a particular type take effect simultaneously. This list is a slightly modified form of the Judges Guild chart:Of course, you could still roll initiative to see who goes first at each of the stages—if that's your thing—or let those wearing no/light armor or with high dexterity act one step sooner.
Posted by paulg at 11:06 PM 5 comments:

Telecanter posted a PDF with some of his favorite house rules, which reminded me of one I've been considering. I'm not completely comfortable with the way fourth edition separates magic into combat spells and non-combat rituals, but I do think there's a place for ritual casting in OD&D. I like the idea of the PC's bursting into a room to interupt an evil priest muttering over a smoldering brazier and a bound sacrifice. I'm not sure exactly how it should work as a rule, but I'm starting with this on a trial basis:

A magic-user (or cleric) can cast any spell they know without it occupying a daily spell slot so long as they have the spell in written form and can take the time to cast it (two 10 minute turns per spell level). This is not something they can do in combat or any other distracting situation. The referee should make a wandering monster check each turn during ritual spell casting.

I've been studying the LBB's lately, which has caused considerable lengthening of my D&D things-I-thought-I-knew list. One of those things is the prohibition against magic-users wearing armor. This seems to be the only passage in Men & Magic on the matter:

The whole plethora of enchanted items lies at the magic-users [sic] beck and call, save the arms and armor of the fighters (see, however, Elves); Magic-Users may arm themselves with daggers only.

To my eyes, this is only talking about magical armor. It's possible that there's a later passage in the LBB's that explicitly bans mundane armor for magic-users, but based on this I think they should be able to suit-up in full plate. Even the daggers-only clause is joined by a semi-colon to the clause about enchanted items, so it may imply "with enchanted daggers only." That could mean that they can use all mundane weapons but no magical weapons except for daggers. If the referee was feeling perverse, he could even interpret it to mean that magic-users can't wield any mundane or magic weapons except for enchanted daggers. I assume that the accepted doctrine against armored magic-users is rooted in how things worked at Gary's gaming table, but I haven't found much discussion on the usual forums about what a literal reading of the text would mean. Your thoughts?
Posted by paulg at 2:05 PM No comments: Rob posted about drawing large dungeons on large sheets of graph paper. I thought I'd mention that most Kinko's (now FedEx Office) can scan, print, and copy arbitrarily long sheets of paper up to 36 inches wide. Scanning is $1 per square foot, and printing is 75¢ per square foot. That's for black & white; color is probably a lot more expensive. You could also use oversize printing to do things like draw several super-detailed maps on 4x4 grid paper, scan, digitally combine, reduce, and print them on 36" wide paper for a huge map with minute detail. Or draw your map on 24" x 36" paper, scan it, and print it at 8.5" x 11" or whatever. Searching Amazon for grid vellum 36" or grid vellum 24" gives several options for large original drawings.
Posted by paulg at 9:40 AM No comments:

I discovered Encounter Critical, and have been rendered amused. It is clearly a work of genius.
Posted by paulg at 6:44 PM 1 comment: