I just wanted to point-out Beebo's list of horror techniques, which can provide creative inspiration on those days when you're not in a suitably horrific frame of mind for a game. Add a few techniques of your own for a nice d20 list.

(I haven't been posting much lately for three reasons. Things are busy at work, my local D&D group hasn't been active, and I've discovered Minecraft. I'm still reading other D&D blogs and commenting occasionally. Regular posting will resume when I'm less busy and playing regularly. Anybody looking for a player in a PBP or pick-up chat game?)

Monotony of the best power

I've been reviewing my many lingering draft posts. Though never published at the time, this was one of the first posts I wrote for this blog—when my group was just starting to play 4e, and I hadn't discovered the OSR. Even knowing what I know now, I think the point is still valid and worth posting.


I've always liked having mini's at the table, so that's not a problem for me. Tactical concerns are natural for a game that has its root in Chainmail. Since D&D is no longer a wargame, however, it might be better if those tactics were left as a matter of player style rather than enshrined in the core rules. Including a catalogue of tactics provides players with ready options, but tends to make them lazy about looking for alternatives not spelled-out in the book. Such detailed rules can easily serve as a constraint rather than an inspiration.


The 4e mage (and most everybody) uses their best power—the same power—in most combat rounds, over and over again, which turns out not to be an improvement in terms of combat variety over previous editions (fighter attacks with his sword again; mage uses his sling again to save his big spell for the end). As in previous editions, this pattern is exacerbated by lazy DM-ing. I need to give the players situations or set pieces that challenge them to do something out of the ordinary.


The only thing I would add in retrospect is that the interminable combats in 4e make the problem worse.

An abandoned lifeboat at world’s end

Via A Blast from the Past:

The unidentified whaler or ship's lifeboat found abandoned on Bouvet Island on 2 April 1964. The boat bore no identifying marks. There were signs that survivors might have made it to shore, but no trace of them has ever been found. 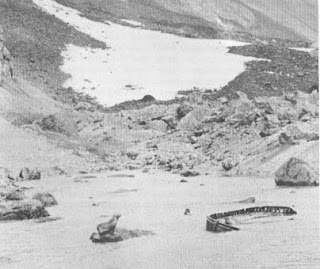 There are already some cursory ship movement mechanics in various places (Labyrinth Lord and the DMG, for example), but if your campaign is conducted largely on the water you might want something more interesting. I should also say that the following rules are a work in progress. I'd appreciate feedback.


I don't want to get too crazily simulationist here. There are well known real-world formulas for all of this stuff, but they're a little complicated for use in play. I asked myself: what sorts of sailing situations do I want the rules to highlight?


This is what I came up with. A ship has three attributes: Length, Sail, and Displacement. To determine the current velocity of a ship, you take those attributes and combine them with Wind.

This looks like a lot of variables for use on the fly, but S+L-D isn't going to change much once the ship is under way, unless the crew starts throwing cargo overboard. And that could be fun.


This only works if Sail is less than or equal to Wind, so the full formula would be (feel free to correct my probably nonsensical math notation) something like V = W (S + L - D), S ∈ [0,W]. A ship flying too much sail wouldn't gain any speed, would handle poorly, and might even capsize.


I haven't yet worked-out the range of these numbers, or how they translate into feet and knots and tons and so forth. They might have a range of perhaps 0-12, so a ship with a Length of 3 would be 30' long. I'll think more about that tomorrow.

How would a sea crawl work?


Sailing from point A to B—even with an accurate map and a skilled navigator—the characters will find more than empty ocean. The referee will make periodic checks for random encounters, perhaps a 1 in 6 chance per 5-6 mile hex through which the characters sail. Those encounters might involve aquatic or flying monsters, but they could also be sightings of other ships, land, or even a change of weather.


The referee can prepare a chart for each of these possibilities: islands along the characters' course, other ships know to sail those waters, and so forth.


When the d6 roll for a hex indicates a random encounter, the referee can roll 1d12 against this chart to determine the nature and direction of the encounter: Depending upon weather conditions and if the characters maintain an active watch, they may be able to avoid the encounter or sail to meet it.


This image and text is © Paul Gorman 2011, and licensed under the Creative Commons Attribution NonCommercial License. Also available as an EPS file suitable for print use.

Here's my first little islet for the Sea of Os'r project. It's called the Isle of Oxuders [PDF]:

At high tide, the Isle of the Oxuders appears to be two tiny islands.
The megalith is visible from a considerable distance to anyone keeping active watch. However, from the sea, it may be mistaken for a natural rock formation. The islands’s other points of interest are not evident unless the party makes a landing.

There is a 2 in 6 chance the cast-away will spot the PC’s vessel, and ignite a signal fire on the highest point of the island, which otherwise appears uninhabited.

Boats landing on the beach at low tide must contend with oxuders, who often surprise by launching themselves from concealed burrows in the sand.

Isle of the Oxuders map teaser

I'll be working late tonight, and won't be able to post the full PDF of my island until I get home. Since the scan is done, though, I thought I might as well post this teaser:

A post at Planet Algol asked: does the OSR need an adventure path? It's not a bad idea, if—as migellito suggested—we use Telecanter's idea of an island hopping campaign:


what if there were one page island and people wrote a bunch of them. Then you might have a campaign that you could pick and choose from a variety of isles.


A bunch of us recently posted one hour dungeon maps. Will anyone join me in jump starting the island hopping "Sea of Os'r" project with a 3-hour islet? (See the Wikipedia islet page for some inspiration.)

UPDATE: I finished my first islet, Isle of the Oxuders.


UPDATE 2: Lands of Ara is hosting the Sea of Os'r Adventure Path page. Check it out!

During middle school and high school, I played almost exclusively home-brew adventures. There's nothing inherently embarrassing about that, except that it means I never played many of the classic adventures.


Tonight, at thirty-some years of age, I played Keep on the Borderlands for the first time.


I know. I'm an aberrant mutant. Please don't shun me.


I've read a few modules, but a larger number I've intentionally avoided to preserve the pleasure of playing them for the first time.


Let me tell you the the facts about KotB I've unintentionally gleaned in the last few decades:

Tonight I entered into the Caverns. I explored the Keep a bit, wandered through a few passages, and killed six goblins. Don't spoil it for me, please. Please don't correct my misapprehensions.


As I've asserted before, this game is a lot of fun. No matter how run-of-the-mill the referee or how clueless the player, the fun of game still manages to shine through.


I had planned to run Stargazer tonight, but decided that the poor turnout would not best show-off the adventure. One of my players (in fact—on this night—my singular player) volunteered to run me through the Keep.

Carter Soles of Lands of Ara has compiled a substantial collection of megadungeon wisdom for your enjoyment and edification.

I'll be running Labyrinth Lord shortly, so I spend my snow day today making a referee screen with various tables and lists. It's laid-out as three letter-size landscape pages, which I've found to make a nice size screen if taped together end-to-end. So, here's my Labyrinth Lord referee screen PDF (and the LaTeX source file, in case anyone wants to mess with it). Here are more of the geomorphs I made (click for a print-quality TIFF):