Thanks to everyone who commented on Wednesday's post! I'm only the most casual of tourists to Tékumel, I'm afraid, and have never read beyond the 1975 EPT book. Rob L's comment from yesterday had me wondering if ditlána was the default origin of dungeons in EPT. Some of the quotations in my previous post undoubtedly focus on the ditlána of the city of Jakálla, but Professor Barker leaves plenty of latitude for a variety of underworld origins:

Scattered over Tékumel are innumerable half-buried, half-forgotten ruins. There are fragments dating back to the prehuman ages, when the Ssú and the Hlýss vied with one another for control; there are tunnels of melted rock and steel constructed during the days of man's first glory; there are jumbled heaps destroyed by the cataclysms which rent Tékumel when the planet was cast into outer dimensional darkness; there are catacombs and subterranean labyrinths dating from more recent empires, cities, temples, pyramids, and fortresses dedicated to the lost and unremembered gods of half a hundred kingdoms. Another factor is the custom of Ditlána, the ceremonial "renewing" of many cities every 500 years: cellars and foundations of an old city are filled in and roofed over, upper floors are razed, and then new and more splendid edifices are built upon this foundation. Such earlier buried habitations are now full of burrows and tunnels built by humans, half-humans, nonhumans, and the many parasites and predators of Tékumel who subsist upon man's leavings.

This reminds me of How to Host a Dungeon.

As I currently see it, there are three major aspects of big-picture dungeon architecture:

Just as in How to Host a Dungeon, each of these will be modified over time, by nature and with use. Natural caves will be expanded and adapted for habitation. Commercial mines will be abandoned, and later repurposed. New connections will be tunneled between levels. Geological evens will reshape sections.

While doing some megadungeon research, I re-read a couple of Planet Algol posts about Saturday night specials (1, 2) that include this EPT quotation:

"Here too, the role of the "Saturday Night Special" cannot be overemphasized. Aside from the deliberately or randomly determined "normal" contents of Underworld areas, it is interesting to develop large complexes inhabited by special beings. These should have special histories, and players should hear legends of their existence on the surface. Their abilities and treasures should be individually devised, since these add interest and spice to the game."

So, I dug into the Petal Throne PDF, and found this:

An Underworld should consist of a number of levels of passageways, rooms, catacombs, shrines, tombs, etc., etc. Each level is drawn on a sheet of graph paper (10 squares to the inch provides sufficient room to develop large temple or tomb complexes). Levels are interconnected by stairways, sloping passages, chutes, vertical shafts with or without ladders—etc. Levels need not be exactly one on top of the other, nor need they all join neatly: i.e. one may have a level off to one side which is approachable only by a stairway down from some upper level and which is not connected to any further upper or lower levels, Thus, the Underworld of Jakalla has a very extensive first level, drawn on a 17" x 22" graph paper. Stairways and other types of passage lead downwards from this to other levels, but those levels themselves are only occasionally interconnected. Certain passages branch off to tie in with still other Underworld complexes; some of these connector tunnels run for miles, being survivals from the ancient pre-cataclysm underground transport system.

It is much more realistic and desirable to have an Underworld developed upon logical, "scenario" lines, with large complexes of tombs, temples or other contents carefully worked out. These can be cut off from one another, of course, by empty labyrinth areas or by randomly selected regions.

Countries, parties, Temple factions, nonhuman races, etc., etc., all will have objectives of some sort, and the referee should sketch these in... Thus, players will encounter members of different factions within the Imperium, various foreign agents with schemes of their own, individuals with a variety of plans and goals, nonhumans, and other beings.

This makes a Tekumel underworld sound very different structurally than an OD&D dungeon (or, at any rate, an OSR megadungeon):

More interesting to me is the classification and arrangement of different types of spaces within a single level:

While perusing the S&W Whitebox rules today, I noticed that the Adventuring Gear section lists both belladonna and wolfsbane. Neither item is described, nor does the lycanthropes section mention either herb. In fact, the rule book never mentions either herb again.

So, I surveyed our family of rules to get a consensus on belladonna and wolfsbane.

(Incidentally, I haven't spent much time with the 4th printing of Core, but I like what I see. It's an improvement over the third printing.)

Labyrinth Lord (and OEC) lists wolfsbane, but not belladonna. It's noted as a ward against all lycanthropes ("the lycanthrope must succeed in a saving throw versus poison or free out of fear"). LL Advanced Edition includes belladonna, but only as an herb "used to relieve aches and pains, reduce inflammation, relieve coughs or used as an anesthetic."

Holmes includes wolvesbane in the equipment list, although makes no mention of how it affects were-sharks and other lycanthropes.

Moldvay lists only wolfsbane. The lycanthrope entry says, "if a lycanthrope is hit by wolfsbane, it must save vs. Poison or run away in fear. The sprig of wolfsbane must be swung or thrown as a weapon, using normal combat procedures." Moldvay doesn't mention any curative properties for those infected by lycanthropy.

The AD&D PHB lists wolvesbane and belladona [sic] in the equipment lists. The DMG says that when a character who has been bitten by a lycanthrope "eats any belladonna within an hour after being bitten, there is a 25% chance the disease will not manifest itself". The Monster Manual lycanthrope entry reiterates that. The only DMG mention of wolfsbane is as a treatment of last resort along with belladonna:

If the adventurer decides to be cured and the methods mentioned thus far have been unsuccessful, he or she may take refuge in a holy/unholy place such as a monastery or an abbey. There the clerics can administer to the afflicted one holy/unholy water laced with a goodly amount of wolfsbane and belladonna prepared by the spiritual methods of that particular religion. This potation is to be consumed by the victim at least twice a day from a silver chalice. No adventuring may be done by the character while he or she is being treated by the clerics. After a month or more (depending upon how advanced the disease is) the player character should be cured and somewhat poorer in the purse, as this procedure is very costly.

OSRIC doesn't include belladonna or wolfsbane in its equipment list, but the lycanthropes entry says: "if a victim ingests belladonna within one hour after the attack there is a 25% chance the disease will be cured." It makes no mention of wolfsbane.

Men & Magic lists wolvesbane and belladona [sic] in the equipment lists, but the lycanthropes entry in Monsters & Treasure mentions neither. The supplements don't mention either plant.

The d20 SDR says that a character afflicted by lycanthropy "who eats a sprig of belladonna (also called wolfsbane) within 1 hour of a lycanthrope’s attack can attempt a DC 20 Fortitude save to shake off the affliction."

Outside the game, wolfsbane is properly known as Aconitum, a genus of pretty flowers in the buttercup family. Atropa belladonna is a flowering shrub from the nightshade family. Though unrelated, both wolfsbane and belladonna are toxic---the roots in the case of wolfsbane, and the leaves and berries in the case of belladonna---and both have medical uses.

So, depending on your rules and your referee, wolfsbane might drive away lycanthropes, and belladonna might cure a character infected by lycanthropy if administered within an hour of infection. But they might not do anything. I sort of like that uncertainty, and I'm inclined to let the efficacy of belladonna and wolfsbane remain uncertain for players and their characters.

Fonts for your PDF's

Even though a content creator has a valid license for a font, that license may not allow embedding the font in a PDF document for commercial sale or even non-commercial public distribution. The issue is ambiguous, but of sufficient concern that Pat suspended PDF sales of Anomolous Subsurface Environment.

I did a little research, and the key phrase seems to be "free for commercial use". The following links offer more than two dozen high quality fonts that can be freely embedded and redistributed, even for commercial use.

This font embedding license gotcha is another reason I'm happy with LaTeX.

I'm posting this from my new Kindle Fire. There are a few rough edges, but it's a great value for the money. It'll be handy at the game table, although ezPDF is a must-have upgrade from the built-in reader.

Burg "Sawmill" Houri discovered specimen 632 in one of the deeper chambers east of the Pits of the Rapacious Uberbeast.

Given a properly specified voice instruction, the devices alters two discrete events that occurred within the last 24 hours by switching two of the involved persons. Everyone remembers the events as they originally occurred, except for the two swapped individuals.

Stuart's science-based cleric class is fun.
Posted by paulg at 3:02 PM No comments:

I thought you might enjoy this pick of actual villagers with torches at the annual bonfire celebration in Lewes. 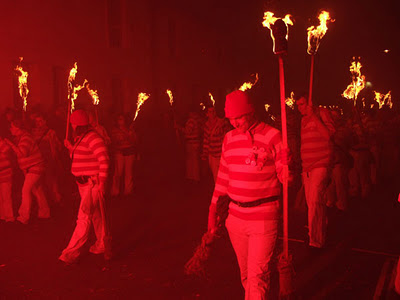 [via Age of Uncertainty]