I'd like to share this passage from Clark Ashton Smith's Sadastor, which reminds me of Roy Batty's "tears in the rain" soliloquy in Blade Runner:

Long, long ago, in the red cycles of my youth (said Charnadis), I was like all young demons, and was prone to use the agility of my wings in fantastic flights; to hover and poise like a gier-eagle above Tartarus and the pits of Python; or to lift the broad blackness of my vans on the orbit of stars. I have followed the moon from evening twilight to morning twilight; and I have gazed on the secrets of that Medusean face which she averts eternally from the earth. I have read through filming ice the ithyphallic runes on columns yet extant in her deserts; and I know the hieroglyphs which solve forgotten riddles, or hint eonian histories, on the walls of her cities taken by ineluctable snow. I have flown through the triple ring of Saturn, and have mated with lovely basilisks, on isles towering league-high from stupendous oceans where each wave is like the rise and fall of Himalayas. I have dared the clouds of Jupiter, and the black and freezing abysses of Neptune, which are crowned with eternal starlight; and I have sailed beyond to incommensurable suns, compared with which the sun that thou knowest is a corpse-candle in a stinted vault. There, in tremendous planets, I have furled my flight on the terraced mountains, large as fallen asteroids, where, with a thousand names and a thousand images, undreamt-of Evil is served and worshipt in unsurmisable ways. Or, perched in the flesh-colored lips of columnar blossoms, whose perfume was an ecstasy of incommunicable dreams, I have mocked the wiving monsters, and have lured their females, that sang and fawned at the base of my hiding-place. 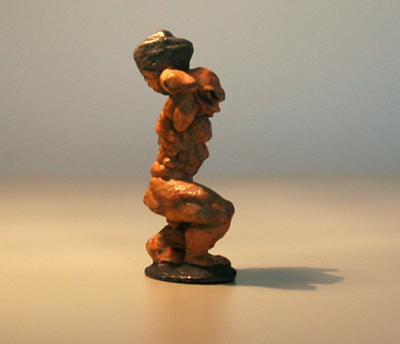 The party finds a room with a giant stone gaming wheel, but they're too shy to give it a spin. Leaving the wheel, they find and (for some reason) burn a storeroom. But the party grows careless with pyromaniacal giddiness. Running from the choking smoke of the fire, long-time hireling Guy falls down a pit trap, breaking his neck.

Undeterred by that setback, the remainder of the party executes their plan to head into the lair of a giant reptile of unknown species. After a pitched battle, the bloodied adventurers find a small but valuable treasure, including a beautiful gold circlet. They beat it back to Halesnug.

With well over a thousand gold pieces in treasure, this delve is the most successful in many weeks, despite the hireling fatality.

New fighting-man Balian of Ibelin joins Slim Charles and Pope Leo. Accompanying them are the hirelings Darric, Guy, Colwin, Gilgrim, and Narton. In town, Slim Charles commissions the manufacture of a tarred intestine hose, and purchases two dogs (Donner and Blitzen). Soon after entering the dungeon, the party runs into a band of orcs. Slim Charles finishes the last one with a very lucky dagger throw, but not before an orc plucks out Derric's left eye and Narton loses a finger. Zero treasure.

Player characters Slim Charles, MacDonald, and Pope Leo return to Stonehell. Accompanying them are the hirelings Darric, Guy, Colwin, Gilgrim, and Narton. Before leaving Halesnug, they visit the blacksmith to collect Slim Charles' new harpoon hand and a large ear-shaped listening horn. In the bowels of Stonehell, MacDonald the fighting-man decides he'll see what happens when he opens a mysterious valve, and is surprised when a cloud of green poison gas fills the room. His throat swells, his face turns blue, his inflated black tongue protruds from the green foam frothing copiously from his mouth, and MacDonald joins his brother MacDougal in the afterworld. Another session with no loot.

Player characters Slim Charles and MacDonald return to Stonehell, along with the new party member Pope Leo IV, a cleric. Accompanying them are the hirelings Darric, Guy, Colwin, Gilgrim, and Narton. Before leaving the town of Halesnug, however, they visit the blacksmith to commission a door listening horn and a harpoon hand for Slim Charles' stump. In Stonehell, the party finds little except green slime and some battered decorative shields. No gold, but for the first time no deaths.

I haven't been keeping up with my Stonehell campaign reports. I know not everybody likes reading other people's play reports, but they are a useful reference for the referee and players. So, this week I'll summarize the sessions from the last couple of months.

Session 2: player characters Slim Charles (m-u), MacDonald (f-m), and Brother Archibald (c) return to Stonehell. They're joined this session (guest player) by Faroah the elf, adventuring as a magic-user. Accompanying them are the hirelings Darric, Guy, Colwin, Gilgrim, and Narton. Darric's admiration for Slim Charles grows, and the magic-user agrees to consider taking the boy on as his apprentice someday. The walleyed Friar Tuck, Brother Archibald, is savagely gnawed limb from limb by giant rats. The others finish off the rats, but not before Slim Charles' hand is bitten from his wrist. They cauterize the stump with a torch.

Unicorns for the digital age

Typo of the day: "Unicorns telnet once per day...."

I didn't expect Wizards to reprint AD&D. That's nice news to wake up to. Now if they'll only reprint the whitebox....
Posted by paulg at 9:21 AM No comments:

SOPA and PIPA are a really bad deal for the net.

Please take a minute today, and let your legislators know where you stand.

And remember how they voted when they're next up for election.

In richard's comment to Jeff's Wessex carousing post, I learned the word "saltbox". Excellent! I'm not sure if this is a recently coined term or if it's been around for ages, but I'd never heard it before.

I really like Lum's castle name generator. The huge castle map linked in that post is inspirational too.

Beejallyla's Creature Splice combines any two different types of creatures with total hit dice equal to or less than the caster's hit dice. The referee determines the result of the splice—the monster's intelligence, temperament, abilities, fusion of physical traits, etc.

The new creature has a 3 in 6 chance to survive the combination. Creatures that do not survive have a 1 in 6 chance to rise as undead on the next moonless night.

Check out Mapstalgia, which posts hand-drawn maps of video games drawn from memory. 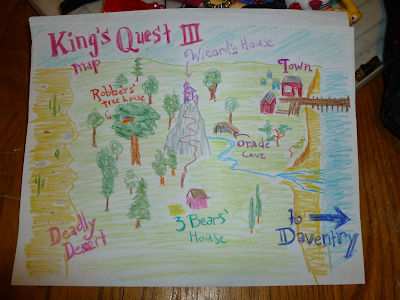 Something Lovecraftian to read

While culling my bookshelves (a painful and endless endeavor), I discovered that Monte Cook and John Tynes' d20 Call of Cthulhu book includes quite a good bibliography. I select from among the listed works those I never read, read but forgot, or feel it's high time to read again: