This OD&D wandering monster poster from Blog of Holding is pretty great. 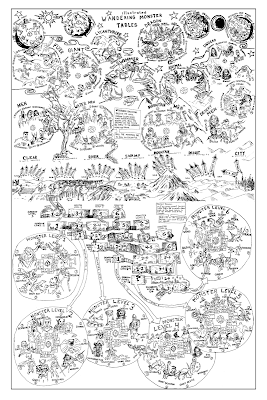 FrDave at Blood of Prokopius posted about the importance of languages in his games, and this paragraph particularly resonated with me:

In LL and B/X, demi-humans begin with the ability to speak several languages. One of the interesting consequences of this in my own game is that the demi-humans have become essential for interpreting the languages of monsters who occupy the ruins. To my mind, this does a nice job of re-enforcing the alien-ness of the demi-humans. It suggests that they are closer to monsters because they can converse with them, as opposed to the human characters which do not begin the game with the same kind of linguistic ability.

I'd like to "re-enforcing the alien-ness of demi-humans," but haven't done much with it rules-wise. I'll be writing up FrDave's idea for my game.

Zak posted about D&D as a modular platform, which is alway how I've viewed it.

Half the time you see a new table or chart on this blog it's because I went "Ok, for my next session I'll need a fortress--hey why don't I spend the amount of time I'd spend designing that fortress adventure making a little subsystem to generate fortresses." This isn't always the best approach but when I do it that way it generally works out--the brainstorming I do to get the entire table might give me ideas I wouldn't have thought of if I'd just been focused on building one location. And, naturally, it saves a lot of time down the road.

The quirky little subsystems are one of the things I love best about OD&D. Unfortunately, few of those subsystems survived to later editions and the retro-clones.

I'd love to see an anthology called Quirky Little Subsystems. Start with Swords & Wizardry Whitebox or Labyrinth Lord: Original Edition Characters as the platform. The book, then, would contain dozens of modular subsystems by various contributors. Individual referees could stick them together or adapt them as desired.

This isn't quite a call for contributions, but I'd enjoy editing and typesetting Quirky Little Subsystems. Is there any interest in such a project? Please comment.

The Hack & Slash post On the Creative Crocodile Conundrum nicely formulates some points against skill checks and for letting players play.

In a couple of weeks, I should have the time to resume regular posting here.
Posted by paulg at 8:15 AM No comments: