Death in the Iliad

Check out this excellent group of infographics on death in the Iliad. I've long maintained that spears need a more prominent place in D&D. 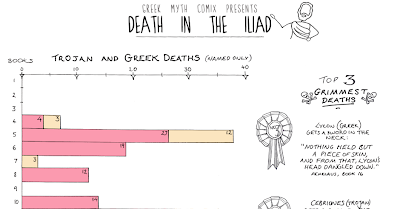 Rolling vs Role Playing Discovery of Traps and Secret Doors

Someone on G+ asked:

Characters find pit traps, for example, by falling in them, as determined with the roll of a die. The Underworld & Wilderness Adventures says on page 9:

"Traps are usually sprung by a roll of a 1 or a 2 when any character passes over or by them. Pits will open in the same manner."

Once players know the pit is there, it's easy to avoid in the future. We might be tempted to complain that dice rolling of this sort is unfair in its arbitrariness, but consider the alternative of role playing the examination every crack, hole, and loose stone in the dungeon.

Other kinds of traps — where the presence of a trap is obvious, but the way of avoiding it is not — we resolve through role playing. "You enter a room with a rotting bisected goblin corpse in its center. A few feet from the goblin's body, an overturned bucket spills grease onto the stone floor. Above the corpse, you notice a dark slot in the ceiling from one side wall to the other, and connecting grooves running down the side walls that seem to be greased. What do you do?" No dice roll required.

What about rolling for secret doors? Here's U&WA again:

"Secret passages will be located on the roll of a 1 or a 2 (on a six-sided die) by men, dwarves or hobbits. Elves will be able to locate them on a roll of 1-4. At the referee's option, Elves may be allowed the chance to sense any secret door they pass, a 1 or a 2 indicating that they become aware that something is there."

The text uses "located" rather than "opened", and draws a distinction between actively locating known/suspected secret doors and passively spotting unknown/unsuspected ones.

That suggests a procedure where, after a secret door is located by a roll, we role play opening the door. "I'm going to try pushing each edge of the door outline, and if that doesn't work I'll fiddle with the nearby sconce."

The mechanics for traps and doors are the same (with the obvious reversal that traps are meant to be found (triggered) and secret doors are not).

How to Open the Secret Door

I made some Judges Guild style numbered hex paper, broken up into four US letter size pages. The zip file includes editable Inkscape SVG's and PDF's. 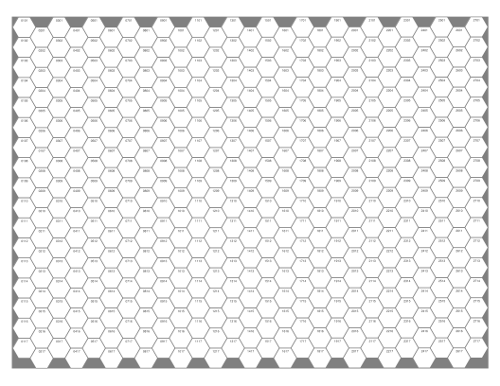 Bookmark: A Framework for D&D Horror

John at Dreams in the Lich House nicely articulates a framework for D&D horror. It sounds like a good plan, and I look forward to hearing more details.