Wayne R. posted about the recurring motif in medieval manuscript marginalia of knights fighting snails. I wanted to point out this tidbit linked from a Metafilter thread on the same topic:

On another level, the wealth and public life of cities prompted the beginning of what we would call 'fashion', and the excess of marginal art provides exactly the superfluity the nouveaux-riches were seeking in the early fourteenth century. An Italian lawyer Odofredus complained that his son went to Paris to study but had ended  up squandering all his money having his books 'bemonkeyed' (fecit libros suos babuinare) and written in gold letters.


Somebody needs to put bemonkeyed books and book bemonkeyers in their game.

Amazon alerted me that the Original Dungeons & Dragon reprint has been delayed. The product page now lists the release date at December 17th, although the email from Amazon says they "do not have an estimated delivery date for the item."

I guess I'd rather see it done right than done on time. 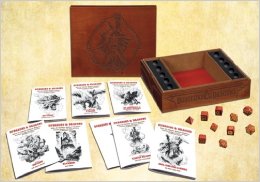 James Smith's post alerted me to the existence of a foreword Gary Gygax wrote for H.G. Wells' Little Wars. Here's the portion that touches on D&D:

What a revelation it was when another friend loaned me his copy of Little Wars in the late 1960s. By that time, I was a board wargame devotee and I had played a few tabletop games with military miniatures. To read the rules the author had established for resolving combat made me want to slap my forehead because we had not thought of them.

[...] Nothing would do but playing the original wargame as set forth in the book. This was accomplished with fellow game hobbyist—and thereafter a two-time co-author with me of military miniatures rules books—Jeff Perren. Jeff and I fought several battles, and his accuracy with toothpick artillery rounds proved devastating. But even in defeat, I loved the game.

Consequently, Little Wars influenced my development of both the Chainmail miniatures rules and the Dungeons & Dragons fantasy roleplaying game. For example, it established the concept of a burst radius for cannon rounds, an idea that was translated into both Chainmail catapult missile diameters and areas of effect for Fireballs in D&D. [...]

Beyond Little Wars, Wells' treatment of subterranean humans in the Time Machine certainly reinforced my concepts of underground adventure areas other than dungeons (as did Jules Verne's Journey to the Center of the Earth and a number of later works of imaginative fiction).