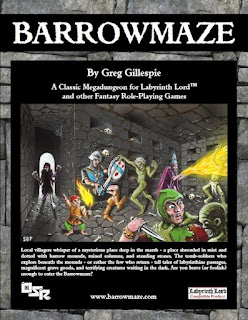 VERY MILD SPOILER ALERT: this review discusses the structure of the Barrowmaze dungeon in a general way.

These are my initial impressions of Greg Gillespie's new Barrowmaze megadungeon.

First, it has an awesome cover, and the interior art is good too. I'm a sucker for Stefan Poag's work.

A few minor quibbles aside, the format of the book/PDF looks fine. Barrowmaze will work well at the table.

The pregen characters—complete with character portraits—are cool, and even include a hireling. Also included are a bunch of new monsters, some new magic items, a couple of new spells, and several random tables for dressing the dungeon.

The Barrowmaze premise is rich. It's atmospheric, and makes the dungeon factions an integral part of the milieu.

Unlike Stonehell, which divides dungeon levels into quadrants and presents each quadrant in the one-page-dungeon format, Barrowmaze presents the dungeon as one large map. Whether this a good or bad thing comes down to personal preference.

The map is drawn in blue. I was concerned that a half-tone screen might make these difficult to read when output to a B&W printer, but they're perfectly legible from my laser printer.

"Although Barrowmaze is presented in the tradition of classic dungeon crawls – there are a few interesting twists. Instead of a multi-layered dungeon with levels stacked vertically, The Barrowmaze is constructed as a series of crypts, tombs, and sepulchers spread out horizontally across a vast area - what I affectionately refer to as a dungeon sprawl. As the players move across  the map, the monsters increase in power and the treasures increase in value."

This structure differs considerably from the one handed down in U&WA or EPT. The traditional stratified dungeon provides two related benefits: added interest and non-linearity through vertical movement, and guidance to help the players choose their own risk level. Barrowmaze is sufficiently non-linear, especially with its multiple surface entrances, that I'm not too bothered by the former. The latter... I'm not sure about yet. I would have appreciated slightly expanded discussion about this in the design notes.

Overall, Barrowmaze makes a very positive initial impression. It looks like a ton of fun, and the price is right ($6.66!). Go buy it!