The Smithsonian Past Imperfect history blog is always interesting. A few weeks ago it posted a story about Tibet's Potala Palace, which included this:

The palace itself made an evocative setting for a murder mystery. To begin with, it was ancient; construction on the site had begun as early as 647[....] The structure that we know today mostly dates to a thousand years later, but the Potala belongs to no one period, and the complex was still being expanded in the 1930s. It’s really two palaces: the White, which was the seat of government until 1950, and the Red, which houses the stupas—tombs—of eight Dalai Lamas. Between them, the two buildings contain a thousand rooms, 200,000 statues and endless labyrinthine corridors, enough to conceal whole armies of assassins. Only a few of the Potala’s many chambers, the first Westerners to gain access to the complex learned, were decorated, properly lit [...] illuminated solely by smoldering yak butter. 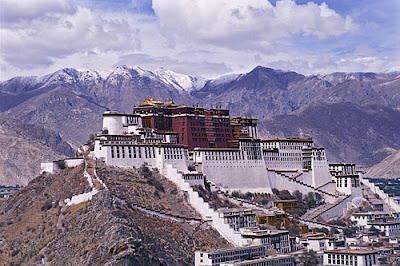 Add a few Mi-Go and abominable snowmen, and you've got a nice little setting. You can even use the AD&D monk class without too much compunction.