"Opposite the front of S. Crisogono, standing a little way back from the street, are the remains of a very interesting excubitorium (50 c.), to which a flight of about 30 steps descends. The floor of the court is covered with black and white mosaics of marine monsters, a polypus, and other animals, surrounded by the sea. Each of the centaurs holds a torch, one of which is alight, the other spent—supposed to indicate the firemen on and off duty. [...] In the cenre is a six-sided cistern. On the right is a species of temple or lararium, richly decorated in moulded terra-cotta, once picked out with coulour. At its entrance are Corinthian pilasters, with entablature and pediment; the painted walls are covered with graffiti; and in the apse is a marble statuette of Mercury. On the opposite side of the court are the guardrooms, sleeping apartments, kitchen offices, and a well; and on a pier to the left are graffiti of greater importance (cir. 225), showing that the edifice, once a private 2nd century house, had been let or sold to serve as an outpost (excubitorium) for a detachment of the 7th cohort of the Roman vigiles."

Most definitions on the web, and even in a couple of architectural dictionaries, say that an excubitorium is sleeping quarters for city guards, but in actual use it seems to always refer to a firehouse. Fire may not be a major problem in a stone dungeon [see Richard's comment below!], but it was a significant concern for the occupants of Rome, and would also be a major hazard for most ancient/medieval fantasy cities. Roman vigiles kept watch from numerous excubitoria located throughout the city, where they would respond to fires with buckets and axes. They couldn't do much to extinguish a raging fire, so the vigiles focused on early detection and prevention; they were empowered to break into any private property if they suspected a fire hazard.

I think these Flickr photos show the excubitorium described above as it appears today.

The quotation comes from the 1899 A Handbook of Rome and the Campagna, which incidentally has some nice maps in it: 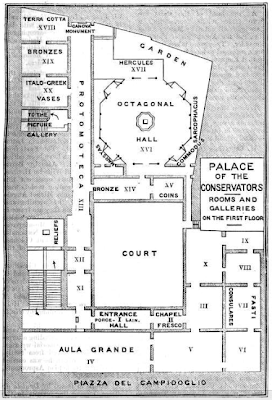