J is for Jacquemart

A jacquemart (also spelled without the "c") is a brass figure that moves by clockwork. Typically these figures appear in pairs—one on either side of a bell, which they strike with hammers. 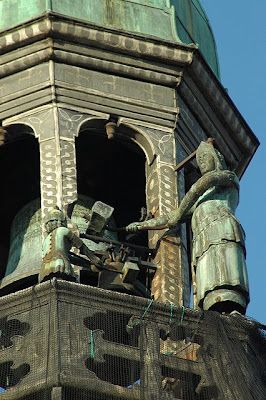 If one was of a mind to put jacquemarts in one's dungeon, the obvious thing would be to make them some sort of golems or ambulatory automatons to attack the PC's. That's a bit too obvious. More interesting would be for the players to see without being able to immediately reach one or more jacquemarts. Soon after first seeing them, the players discover or deduce their terrible mechanical function.

The exact nature of that function is up to you. Perhaps some twirly-mustached villain has bound the princess helplessly to the bell, soon to be pulverized by a dumb jacquemart hammer unless the PC's reach the works in time. Or perhaps the clockwork has been in motion for centuries, slowly chipping away at the lock imprisoning a Great Eldritch Horror.

Though the players can see the inexorable, pitiless progress of the clockwork from some distance, it will take them time to fight their way up the mountain or across the gorge. Melodramatic? Yes, but it might be fun.

The above photo was dedicated to the Creative Commons by Jean-Louis Zimmermann.