H is for Hearse

I admit that my selection for H is driven more by etymological interest than utility in a dungeon, but a hearse is a fine thing still.

Hearse originally meant just an iron grating, such as any gate or portcullis. The word comes from the Old French herce (a rake or harrow) because of the spiky ironwork. Eventually, the meaning narrowed to refer to a fence around a tomb or a temporary iron triumphal arc erected over a coffin, usually draped in banners and affixed with candles.

Our contemporary sense of the word dates to the seventeenth century. 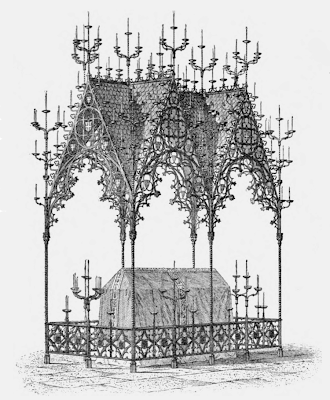 (Incidentally the Old French herce might be traced back to the Latin hirpus for wolf, because of the resemblance to sharp teeth. I think it's a nice poetical image—the coffin resting inside a wolf's maw.)